Litecoin (CCC:LTC-USD) is the 15th largest cryptocurrency, according to Coinmarketcap.com, with a $10.7 billion market capitalization. It is also one of the first blockchain currencies, emerging fairly soon after  Bitcoin (CCC:BTC-USD). Therefore, Litecoin crypto is likely to rise along with Bitcoin if it starts to recover. 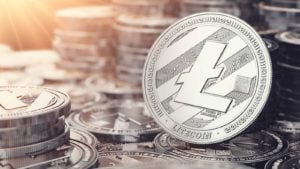 However, most investors should have sold then. That’s because Litecoin crypto immediately sank over several months to July 19 when it ended at $107.40 per LTC token. However, since then the crypto has floated up by 48.8% to $159.82.

As an article in Cointelegraph points out, when Bitcoin moves higher, so do a number of the “legacy” cryptos like Litecoin. Litecoin was modeled after Bitcoin, and it tends to move in tandem with Bitcoin.

The reason is that its founder, Charlie Lee, wanted to position Litecoin as a “silver”  to Bitcoin as “gold.” According to a recent article, he is quoted as saying he wanted the cryptocurrency to be a “lite” version of Bitcoin. So, one way to do this was to dramatically increase its supply.

The net effect is that Litecoin has had a similar correlation with major market moves by Bitcoin. However, Litecoin crypto has also had some major moves apart from Bitcoin. Here is one.

Litecoin Crypto in the News

On Sept. 13, investors in Litecoin woke up to a surprisingly new announcement from Walmart (NYSE:WMT) that the retailer was going to accept Litecoin as a payment method. The LTC coins immediately shot up by 34%, according to Decrypt online magazine

And why not? That would have been the first major company announcement other than Tesla (NASDAQ:TSLA) with its on-again, off-again acceptance of Bitcoin as a payment method.

The only problem is that the announcement was fake news. Walmart came out later in the day and said that this was not an authentic press release.

Nevertheless, one good thing to come out of this saga is that it shows that Litecoin is still seen by the public as a potential payment method. Recently PayPal (NASDAQ:PYPL) announced that its UK customers would be able to buy and sell four major cryptocurrencies. One of the four was…

According to Jay Milla, the director of the Litecoin Foundation, the number of active addresses on the Litecoin (CRYPTO:...

You won't have to stick to Bitcoin if you're determined to pay for your movie ticket with cryptocurrency. AMC...

The Top 10 Cryptocurrencies to Consider Investing In