A recent meltdown in the Bitcoin price from its record high near $42,000 has done little to shake its bullish bias, at least according to a Bloomberg analyst.

In a report published on Wednesday, senior commodity strategist Mike McGlone wrote that the flagship cryptocurrency could hit $50,000 in the coming sessions. He called out Bitcoin for its ability to hold the $30,000-$40,000 range during its latest pullback move, noting that $30,000, in particular, served as a solid support base to attract institutional investors.

“About $30,000 is the threshold supported by a rising tide of institutional investors and global adoption as a store-of-value,” Mr. McGlone explained. “Our graphic depicts the milestone of the 20-week moving average crossing above $20,000, which we view as an extreme downside level in the event of a risk-off swoon akin to 1Q20.”

As to what brought institutional investors close to Bitcoin, Mr. McGlone highlighted “ample evidence” that showed funds flowing from gold to crypto markets.

Abnormally low-interest rates, rising debt-to-GDP ratio, and global quantitative easing provided strong tailwinds to the Bitcoin price. With its limited supply cap of just 21 million tokens, the cryptocurrency experienced a dramatic spike in its demand as a safe-haven asset. 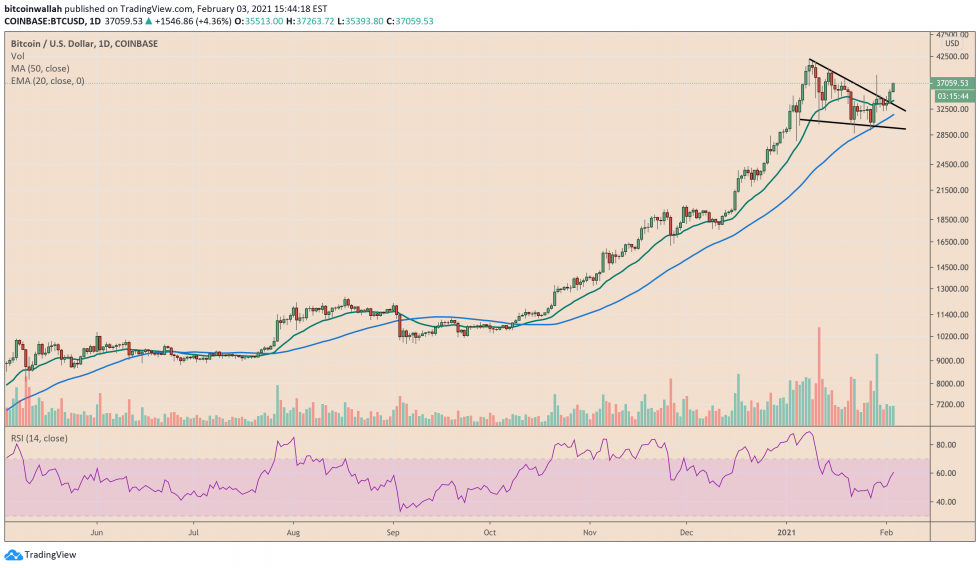 Bitcoin surged by up to 988 percent from its mid-March nadir of $3,858. Source: BTCUSD on TradingView.com

Mr. McGlone noted that institutional investors started gaining exposure in the Bitcoin market via Grayscale Bitcoin Trust. The New York-based fund enabled investors to gain exposure to Bitcoin while avoiding the challenges of buying, storing, and safekeeping it directly.

Capital flowed into the Grayscale’s trust while it kept on accumulating more Bitcoin to back its security offerings. Meanwhile, gold ETFs experienced withdrawals.

“Our [research] depicts accelerating flows into Grayscale Bitcoin Trust (GBTC) as they decline in total known ETF holdings of gold,” said Mr. McGlone. “At almost 700,000 Bitcoins, GBTC is reaching record highs, while gold ETFs have dropped to about 107 million ounces from the October peak, just above 111 million.”

One More Zero to Bitcoin Valuation

Institutional adoption for Bitcoin tends to increase further as its volatility drops to the levels of other traditional markets, such as gold and stocks. Meanwhile, Mr. McGlone stated that the cryptocurrency’s volatility might even plunge below that of the precious metal, making it a more attractive safe-haven asset by 2025.

“Bitcoin 260-day volatility [is] in early bottoming days from an all-time low vs. the same gold…

Global market sentiment wobbled this past week after initial euphoria on a disappointing US jobs report that further cooled...

Once known for beating the S&P 500 index for 15 years as a fund manager of Legg Mason Value...

Smart money moving out of Bitcoin to gold; and inflation fear spreads

Ritesh JainGlobal Macro Investor & One of Top 3 Global LinkedIn Influencers on Economy and Finance, MumbaiHe is a...

When Buckminster Fuller was asked by a 12-year-old boy how he would suggest solving international problems without violence, he...

Su Zhu and Kyle Davies are the founders of the crypto asset hedge fund Three Arrows Capital. They told...