For the past week or so, Cardano (ADA) has grabbed the crypto headlines due to numerous project developments. To begin with, IOHK begun the rollout of the Cardano upgrade known as Shelley. This upgrade has been years in the making and Shelley will usher in an era of decentralization and staking on the Cardano blockchain network.

Beginning July 7th, Cardano investors and holders will be able to stake their ADA on wallets that have undergone the upgrade. Furthermore, staking rewards will start being distributed on August 18th as explained through the Shelley rollout plan below courtesy of IOHK. 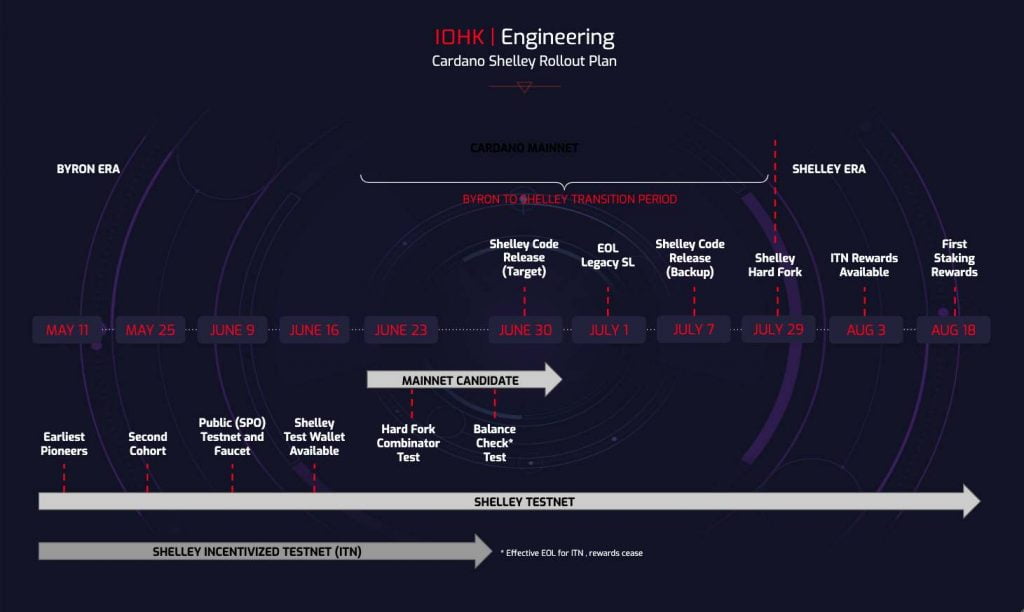 Secondly, during the Cardano Virtual Summit this past Friday, the team at IOHK announced that beginning Q4 2020, users will be able to stake their ADA from inside Coinbase’s cold storage.

To note is that Cardano is yet to be supported for trading on Coinbase. This, in turn, means that there is a high chance of ADA being listed on the trading platform this year and before staking can be available on Coinbase Custody. Cardano has been explored by Coinbase for potential listing since mid-2018.

Cardano Could Break $0.11 on Coinbase Staking and Shelley Rollout

Also in the past week, Cardano has embarked on a confident climb in the rankings on Coinmarketcap due to the events surrounding the project. On its way up, ADA has now edged out ‘heavyweights’ such as Binance Coin (BNB), EOS and Crypto.com Coin.

The digital asset is currently ranked eighth and could with time, also edge out Litecoin and Bitcoin SV based on the activities surrounding the project well into the fourth quarter of 2020.

Further checking the daily ADA/USD chart, the following can be observed.

Therefore, ADA/USD might be due for a correction and/or sideways as it gathers momentum to break the $0.10 – $0.11 resistance level. The momentum for this move will be from the rollout of Shelley into August as well as staking on Coinbase custody in Q4. Furthermore, the probability of ADA being listed on Coinbase in 2020 is high.

However, with Bitcoin exhibiting some weakness that could lead to a fall below $9,000, the 50-day moving average might provide adequate support for Cardano between $0.08 and $0.07.

As with all analyses of Cardano, traders and…