More than eleven years after its creation, Bitcoin (BTC-USD) is struggling to gain widespread institutional acceptance. While constructive criticism is healthy, ARK believes that some influential financial research institutions are dismissing bitcoin based on stale information, incoherent arguments, and flawed analysis.

Given Goldman Sachs’ recent stance on Bitcoin, ARK is revisiting the most common misperceptions weighing on its acceptance. We look forward to participating in healthy and educational debates about bitcoin and the important role we believe it deserves in well-diversified portfolios.

Claim: Bitcoin is too volatile to serve as a store of value.

Counter-Claim: Bitcoin’s volatility highlights the credibility of its monetary policy.

Critics often point to bitcoin’s volatility as a “store-of-value deal breaker.” Why would anyone want to store value in an asset with such dramatic swings in its day to day price?

In our view, these critics do not understand why bitcoin is volatile and why its volatility is likely to diminish.

While distracting naysayers from assessing its role as a store of value, bitcoin’s volatility actually highlights the credibility of its monetary policy. The Impossible Trinity, a macroeconomic policy trilemma, explains why. As illustrated below, the trilemma postulates that, when formulating monetary goals, policymakers can satisfy two out of three objectives, not all three, as the third will contradict one of the first two. 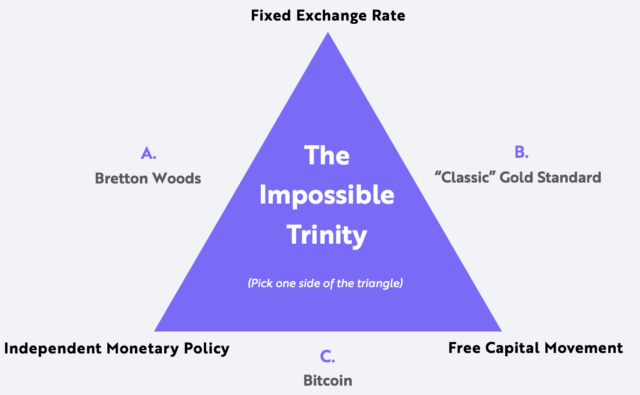 Based on the trilemma, we can understand why volatility is a natural consequence of Bitcoin’s monetary policy. In contrast to modern central banking, it does not prioritize exchange rate stability. Instead, based on a quantity rule of money, Bitcoin limits the growth of money supply and allows the free flow of capital, forgoing a stable exchange rate. As a result, bitcoin’s price is a function of demand relative to its supply. Its volatility should come as no surprise.

That said, bitcoin’s volatility is diminishing over time, as shown below. As its adoption increases, the marginal demand for bitcoin should become a smaller percentage of its total network value, diminishing the magnitude of price swings. All else equal, for example, $1 billion in new demand on a $10 billion market capitalization, or network value, should impact bitcoin’s price more significantly than $1 billion in new demand on a $100 billion network value. Importantly, we…