The pairing between the Basic Attention Token (BAT) and Bitcoin seems on the verge of a major move, following months of range trading. So what does the future hold for the BATBTC pair after so many months of being stuck in a range?

Despite being named as one of the most promising tokens for 2020, BAT has struggled to please since, as it continues to trade in a consolidation range for the 9th month now.

At the start of the month, it was announced that the BAT team and Binance had entered into a partnership which would see a new widget for Binance placed on the Brave browser. This is reported to be the first instance of a browser integrating a widget for an exchange in order to allow for seamless trading and management of cryptos on that exchange. It is expected that with time, a VPN solution for the Brave browser would also be added by the Brave team, thus allowing users of this widget to protect their identity from hackers.

The Brave Browser should really be the vehicle here to drive BAT usage and growth. The concept is novel and inventive and has a niche following among techies and privacy enthusiasts. It’s also something that no other crypto has. However, as Brave download numbers continue to increase, BAT value has not seen the kind of investor attention that coin holders were hoping for.

Like most Bitcoin-paired altcoins, BATBTC seems to be more price-sensitive in the short term to what happens on the Bitcoin side of the equation. The response of the pair was not much changed to what happened during the Bitcoin-halving event.

The fundamentals are not expected to change in the short-term. However, long-term outlook may change, especially if the partnership between the BAT team and Binance pays off by bringing more users to come on to the Brave browser and view ads there.

The technical analysis of BATBTC starts from the weekly chart, where the pair is seen to be trading in consolidation.

After a correction which brought down the pair from its April 2019 highs, BATBTC entered into a sideways trend which started on September 2019 and has continued till date. However, the range of trade has been narrowing and price seems to be on the verge of major move.

Evidence for this move can be seen on the daily chart where we see the price candles being contracted into the confines of the symmetrical triangle, with price action almost at the convergence point of the two triangle borders. 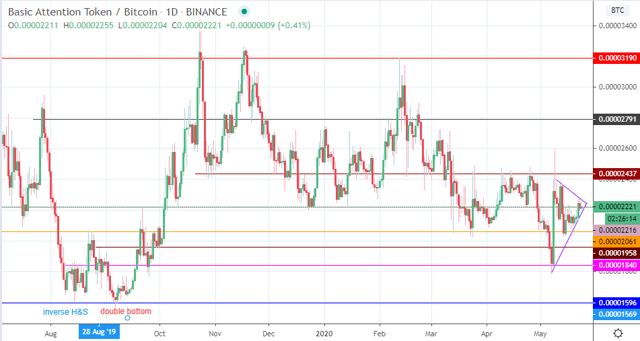 The apex of the triangle is located at the 0.00002216 price level, where the lows of 11 October 2019, 14 January and 25 April 2020 are found. A cluster of lows that formed between 22 December and 29 December 2019 is also found at this price level. The current daily candle is resting on this support line, as the candle of May 23 was a bearish candle that found support at that point.

A bullish breakout from this point will…